Keeping this blog up to date is a never-ending battle, partly because of time constraints and partly because of our internet connections. As you know, I also have a difficult time being brief, so summarizing is not easy. When something interesting, fun or meaningful happens I like to include it, as my plan is for the blog to also become a summary of  our mission. On the other hand, when things aren't recorded shortly after they occur, I sometimes feel like I  miss conveying the spirit of the event. With that in mind I want to say that by the end of this month (9 days), I plan to either be current or to omit more than my obsessive-compulsive personality is comfortable with and start the new year off with current information. (I guess that's a new year's resolution)

In the meantime, the following is what we have experienced in the past few months.

In August we went to Ottawa for a Zone Conference and to meet our new mission president and his family. Pres. Patrick was featured on the church broadcast, “Hastening the Work of Salvation”. He was the Stake Pres. in the Florida stake that had such success with missionary work when one of the families in his stake included, in the birthday party invitations of their eight year old daughter, an invitation to her baptism as well. 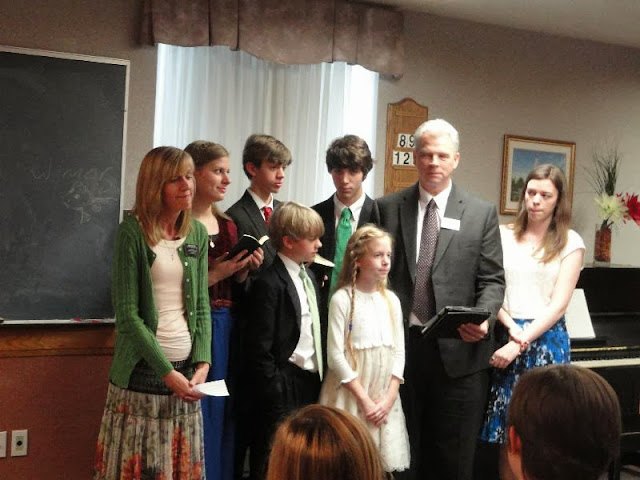 We stayed in Ottawa an extra couple of days to help Pres. Conway pave his driveway with bricks. It was hard work and it was sooo hot! Plus 35 with the humidex! But we had a great time.


It’s so nice to have neighbors who like to bake! Elder Seaman made us a Baked Alaska. It’s a cake baked in a hot oven with ice cream in the middle and meringue on top. It was delicious! 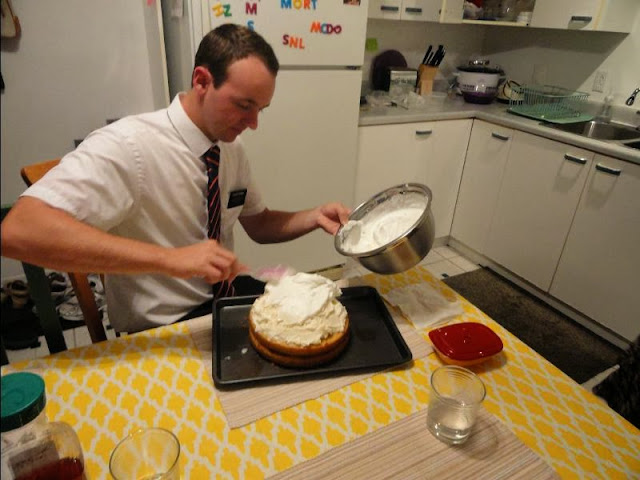 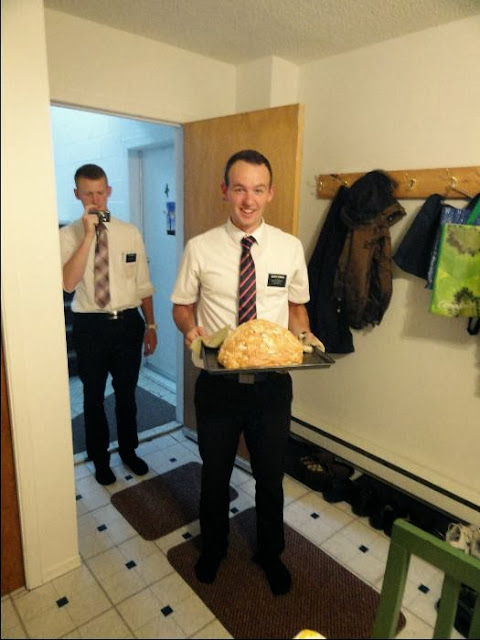 You can tell the Elder Smith and Elder Seaman have been working hard and are tired.
We often spend time from/in our kitchen chatting about the day’s events.
We discovered it was Frank Fengler’s birthday late in the evening.  So on the way home from English class we paid him a surprise visit to wish him “joyeux anniversaire”. 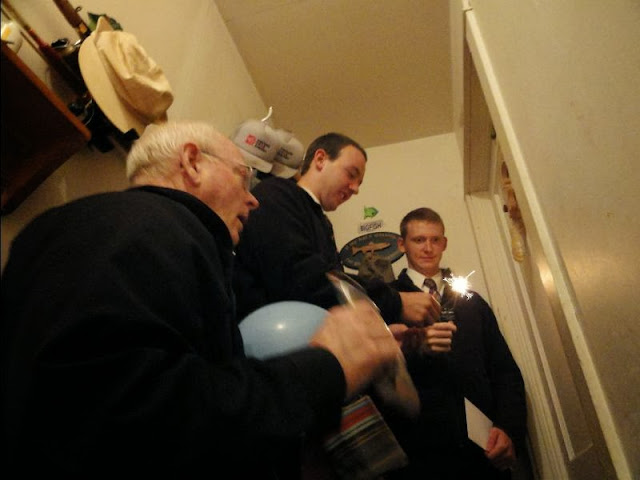 Brother Fengler is one of our stalwart members.

Elder Rhodes gave the van a good coat of wax to prepare it for winter. 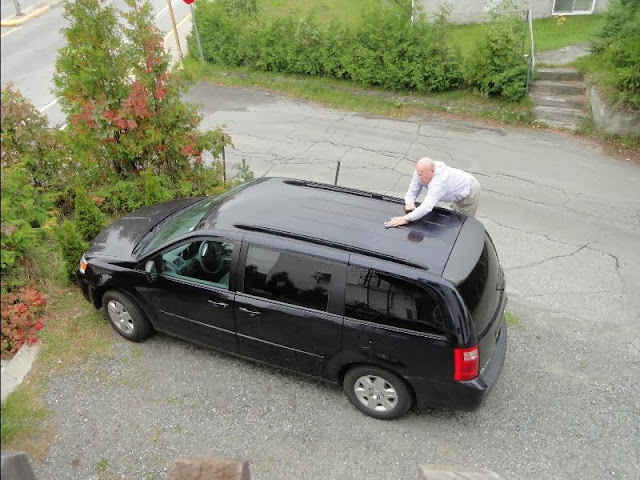 Some of the vines turn a beautiful vibrant red in Sept. Then, in a matter of day, it seems, the vines are bare.
This house is across the street from our parking area. 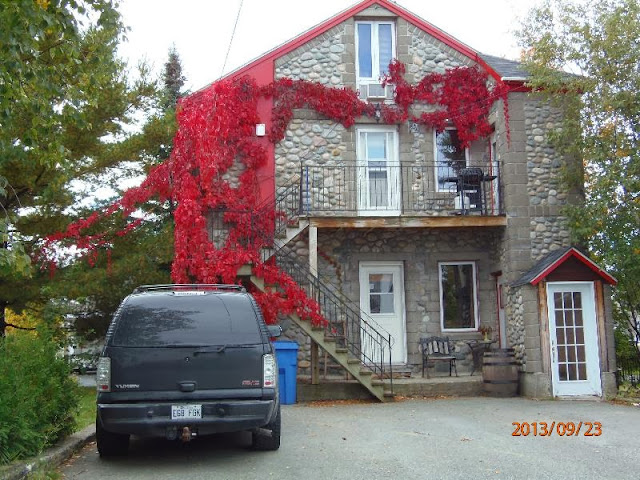 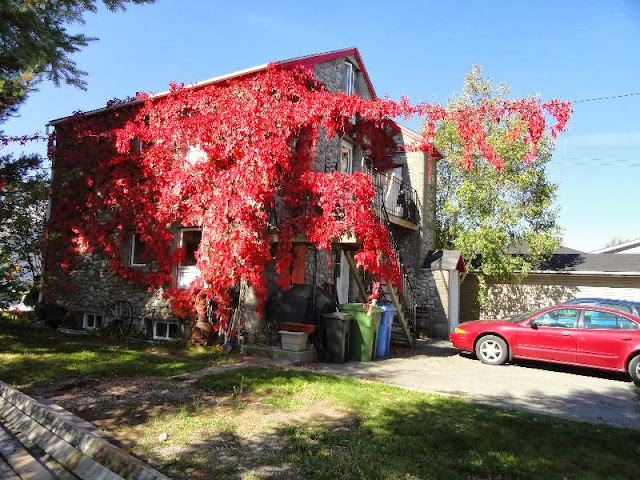 At the end of September we had a corn bust at the home of the Simard-Ricard family in Rouyn-Noranda. The Stake Pres. and one of his counselors attended, as well as the Branch President, one of his counselors
and both of their wives. All six of them live in Ottawa. We are always thrilled to see them. They are so supportive of our remote and tiny branch. 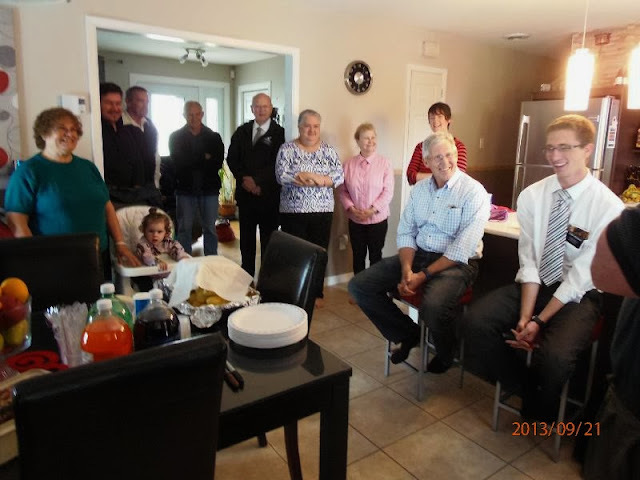 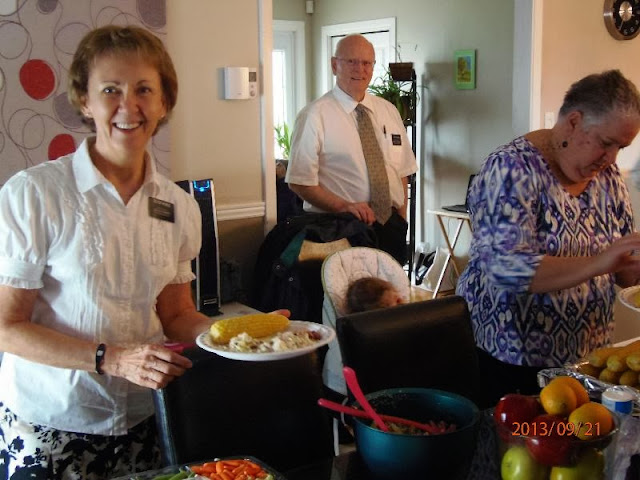 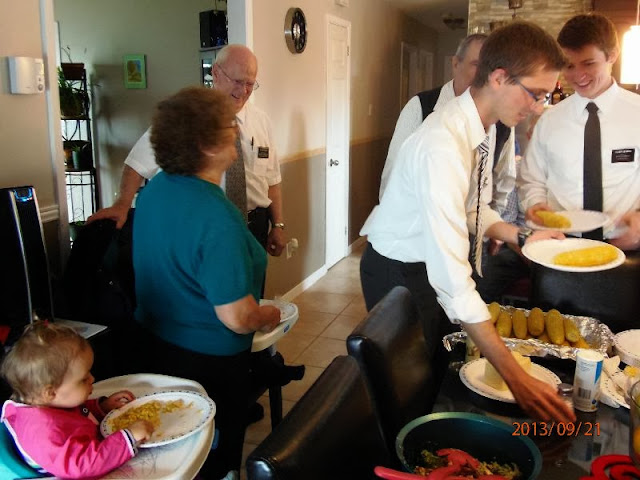 However, you would think that, with so many leaders and wives from Ottawa visiting at the same time, I would have suspected that something else may have been afoot, but I did not.

I was taken completely by surprise when Pres. McAteer announced, on Sunday, that Pres. Conway was being released as Branch President. Of course that meant his counselors were also released. I was heartbroken, even though I knew it was bound to happen before our mission ended. Pres. Conway is such a dedicated man, and so close to the Spirit. We have grown to love him very much. (Missions are a great place to make eternal friends)
It didn't change things much for Elder Rhodes. He just changed titles, as did Brother Brulé.


Hopefully I'll get the last couple of months up in the next few days, but in case I don't, I want to wish everyone a very merry Christmas.
This will be our first Christmas away from our family, and though we will miss everyone very much, it's wonderful to celebrate the birth of our Savior by serving him here and having this special opportunity to share the message that He lives and loves us all!
Posted by Tina at 15:47