These are old pictures, but they are a record of what we've been doing in the past couple of months. If I don’t get them posted I’ll never get caught up and move on. So I hope you’ll plough through them and get a sense of what our life has been like.

We celebrated our friend, Richard’s, birthday with Elder Smith and Elder Grant. I couldn't resist posting this, as old as it is. Isn't this typical of well-wishers watching the birthday person blow out the candles? 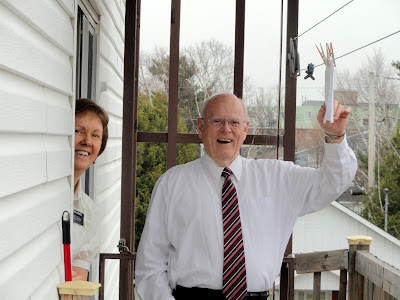 We've had great fun with the clothes line that runs between our balconies, sending back and forth everything from messages to treats.

Do you recognize the items on the bottom of this next picture?
We all stacked our cameras on the study table and set the timers. Ours was on the top a little behind the others. 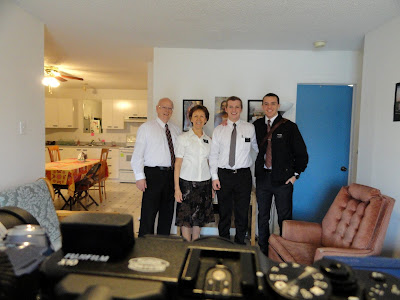 We had a hilarious time trying to stay in place until all the cameras went off, especially before we realized we had ours on the “burst” setting. Elder Rhodes always managed to move just before the last shot.

This was the first time we had to deal with transfers. And although we don’t actually have companions, except for each other, we have worked so closely with these two Elders that saying goodbye to Elder Grant
was very difficult, to say the least! Both he and Elder Smith have become very dear to us.

Missionaries are NEVER allowed to back up a vehicle without being directed. 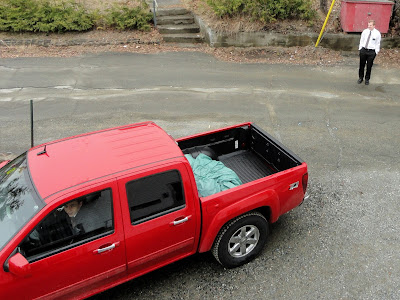 We drove to Ottawa for Stake Conference in May. 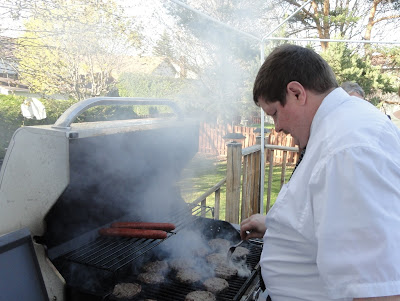 President Conway, our Branch President, had a barbecue at his house for all the members who managed to make it to Ottawa. The weather cooperated and it was great! Our Branch is so spread out we don’t get too many opportunities to socialize together. 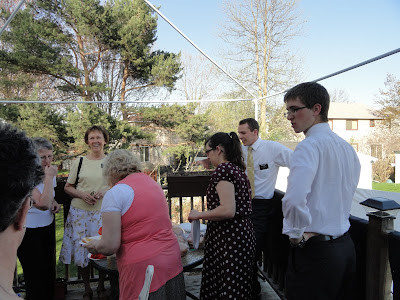 Conference was the same week as transfers, so we met our new missionary, Elder Messinger,  for the first time in Ottawa. 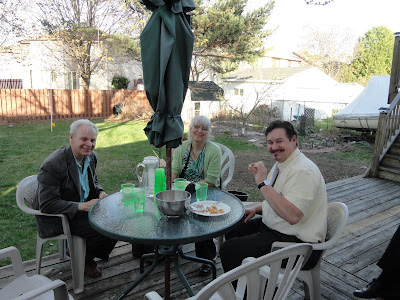 We thoroughly enjoyed the conference messages and also meeting other members in the Stake. Being so isolated up in Abitibi has given me a new appreciation for what a blessing it is to live in Southern Alberta, where we can so easily enjoy associating with members of the Church.

The drive to and from Ottawa is beautiful in the spring. Just like driving through
the mountains in Alberta but without the elevation or the mountains. 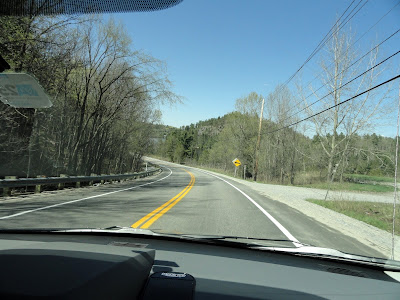 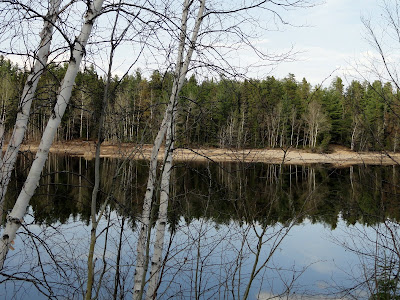 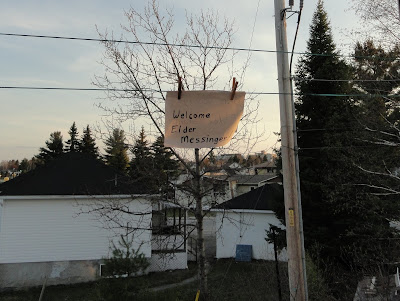 After welcoming Elder Messinger, we immediately put him to work teaching us French. 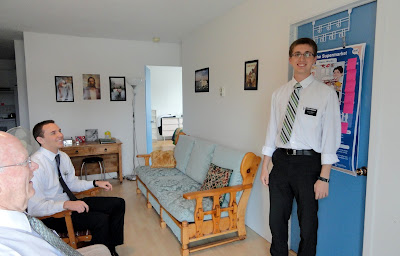 That’s the Daily Dose English poster on the door, converted to French as I    mentioned in an earlier post.


And this is some of the English class. 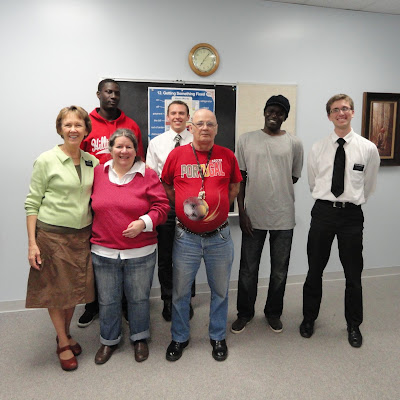 In the back with Elders Smith and Messinger are two wonderful young Muslim men, Melek and Mor. Nancy, who is wonderfully friendly, and Levi, such a card, are in the front. We actually now have nine students, but they never all seem to be there at the same time. At that time the Elders were mostly teaching and I was subbing, but shortly after these pictures, I took over the teaching and they sub if I’m not available. I really enjoy the people and we always have a great time in the “huddle”.

For Mother’s Day I asked the missionaries to be my surrogate children and invited them and our friend, Frank, for dinner. They agreed to do me the favor. (Wasn't that kind of them?) I thoroughly enjoyed the evening. 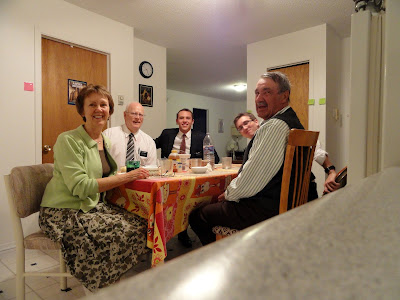 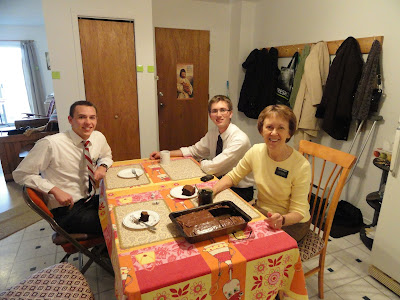 Because the Elders were unavoidably detained on Mother’s Day, due to Branch responsibilities, they arrived late for dinner on Sunday. They had wanted to surprise me with a cake but hadn't had the opportunity to bake one, so they surprised me on Monday instead. It was so sweet of them! I felt loved and appreciated.


We celebrated Elder Messinger’s birthday with a dinner and I got to make him a cake. 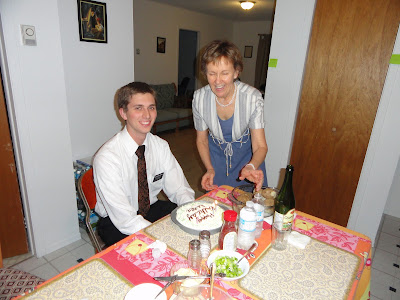 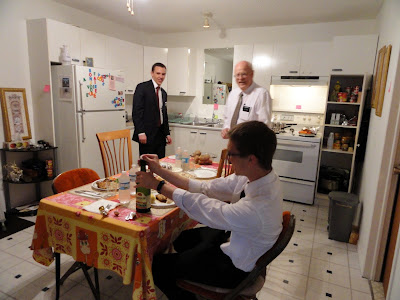 Elder Rhodes and Elder Smith decided to keep a safe distance as the birthday boy popped the cork of a non-alcoholic bubbly left over from Mother’s Day.


Sometimes we get to enjoy the most unexpected sights from our balcony. 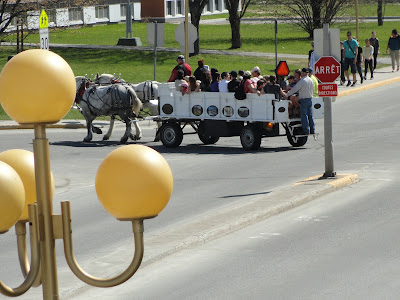 Children enjoying a wagon ride. I think they're from the Native Friendship         center. 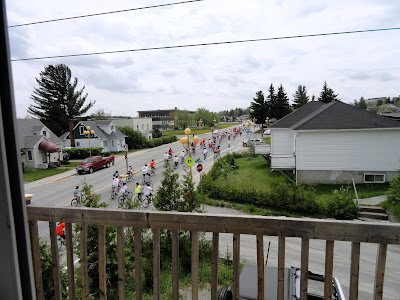 This has taken me much longer to compile than I had expected, both because of my inexperience with computers and blogging and because the internet is soooo slow here it takes forever to upload pictures. I tried taking the computer to the church to work from there, but it wouldn't even connect to the internet. Sometimes I can't even get my email to come up. But I'm learning a lot so hopefully it will get better and I'll be able to post more regularly.

I actually have more prepared to share but no time right now to get it onto the blog. So I'll be back!